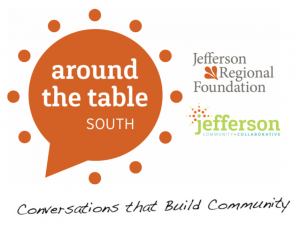 While attending a national conference in Miami earlier this year, Mary Phan-Gruber learned about a Chicago-based initiative in which residents build connections, share ideas on strengthening their communities and inspire positive efforts through a series of mealtime conversations over a one-week period.

Polls conducted after the Chicago event revealed that 75 percent of participants felt more informed of a community issue than before the gathering, while 91 percent intended to engage in some kind of action.Ms. Phan-Gruber, executive director of the Jefferson Regional Foundation, subsequently shared those findings with her board, which agreed the community engagement approach was an exciting prospect for the communities in the Route 51-to-Elizabeth corridor and the lower Mon Valley.

Consequently, the inaugural “Around the Table South” will convene from Monday to Friday, Oct. 15 to 19. It will bring together 1,000 people in a series of 100 mealtime conversations hosted by organizations, businesses, libraries, hospitals, school districts and other gatherings at various sites throughout the region.

Sponsored by the nonprofit Jefferson Regional Foundation and the Jefferson Community Collaborative. Ms. Phan-Gruber said the event ties in with the foundation’s focus on three priorities; increasing health access and prevention, improving child and family outcomes and strengthening vulnerable populations and communities.

“The Around the Table South motto is ‘conversations that build community.’ “It is about people thinking of how they can improve the health of their communities while also strengthening their communities,” she said.

Host groups will invite eight to 12 guests to breakfast, lunch, or dinner and, during the meal, the group’s hosts will guide thought-provoking conversations with questions such as “How can we work together to make a stronger and healthier community?” Guests also can raise issues of their own.

“The conversations are designed to be solution-oriented and positive, emphasizing South assets: not only the dollars, but what people do together and the leadership they show,” Ms. Phan-Gruber said.

An orientation for hosts was held Oct. 2 at South Hills Country Club, where they learned tips for facilitating a conversation in which everyone has a voice; sample conversation guidelines and question prompts.

Hosts can cook, purchase a meal, or ask their guests to each bring a dish to share potluck-style. Hosts also will either take notes during the discussions, or assign a guest to be a note-taker. Afterward, guests and hosts will receive surveys to complete on issues, ideas, and the experience. Respondents can remain anonymous.

The Jefferson Regional Foundation will collect and publish the insights, information and inspiration from the table discussions in a report in early 2019.

“It is then up to the communities to take any action,” Ms. Phan-Gruber said.

Among the hosts will be the Brentwood Borough School District, with the meal co-hosted by Superintendent Amy M. Burch and Christine Winiarski, director of special education. Their luncheon conversation will be held on Oct. 17 at the Brentwood Middle/High School.

“Over the past several years the demographics of the Brentwood community have changed,” said Ms. Burch. “Today, over twenty percent of the incoming kindergarten is made up of minority students. Our goal is to identify our communities’ strengths as well as ways to assist new families in feeling a part of the community.”

Anyone interested in participating in Around the Table South should email Ms. Phan-Gruber at mary.phan-gruber@jeffersonrf.org, or call 412-267-6771 by Oct. 15.