Take five minutes and get to know everything about the person sitting across from you.

Who are they? What organization are they from and how can you two work together to make the South Hills even more vibrant?

Welcome to speed networking – think speed dating, except for professionals.

More than 100 representatives from South Hills and lower Mon Valley organizations came together to get to know one another better and find ways to collaborate through a speed networking event held at the Jefferson Regional Collaborative’s quarterly meeting on Jan. 30 in Baldwin Borough. 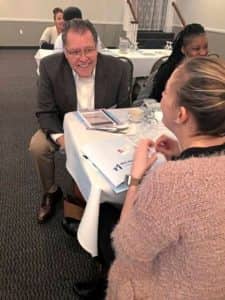 “In the nonprofit world, people are so focused on the needs of the people they’re serving in their community that they end up focused on making sure their agency can continue high-quality services and they often don’t have the time to look up or around or take time to reach out or connect with other resources as much as they’d like,” said Mary Phan-Gruber, executive director of the Jefferson Regional Foundation.

One of the main focuses of the Jefferson Regional Collaborative is networking and connecting local organizations so they can work together to serve the community.

Local groups approached the Jefferson Regional Foundation looking for a way to come together with their neighbors in new ways and make more connections, Phan-Gruber said. They started with a one-day forum. Now, the collaborative meets five times a year and also has smaller action teams that work together on topics such as the Census leadership team or mental health in the community.

“Nonprofit work is very hard,” Phan-Gruber said. “The resources are often very limited and most of these organizations work very efficiently in a very lean way. They constantly are having to ask for support for the impact that they can have on communities. They find that when they join together, they can have a larger impact and they also can learn from each other in ways that are really new and innovative.”

Through partnerships, the organizations are able to “stretch their resources further,” she said.

Every meeting of the collaborative has some form of networking.

Richard Garland, executive director of nonprofit The Blessing Board, which collects donated furniture to give to people that need it, met representatives from five organizations that day.

Through the collaborative, he’s learned that many organizations in the area are serving similar populations and can share resources, he said.

“Oftentimes, you feel like you’re on an island out here trying to get things done, trying to fundraise,” he said. This shows organizations that they’re not alone.

The last time he was at a collaborative event, he was introduced to Global Links. The two are working together now to develop partnerships for the upcoming year to help get medical equipment to people that need it, he said.

Laura Poskin, director of United for Seniors at the United Way of Southwestern Pennsylvania, said the collaborative is always helpful. “We’re all trying to partner with people and work together to build a better community.”

Laura Poskin, director of United for Seniors at the United Way of Southwestern Pennsylvania, participates in the Jefferson Community Collaborative’s speed networking event.

Even in those five minutes, she was able to reconnect and meet new resources that got her wheels spinning.

She reconnected with Tamera Stafford, program director of Gwen’s Girls. The two talked about ways teens at Gwen’s Girls could volunteer to help with cleaning or other daily tasks for the elderly.

In the room filled with South Hills and Mon Valley organizations, Poskin has found resources for ways she can expand her outreach.

“I feel like as soon as I walk into the door, I see new people and people that I’ve met before and it takes me like 20 minutes to go over and get coffee because I’m talking to so many people,” she said.

Jhonna Newby, site supervisor in Clairton for Gwen’s Girls is fairly new to her position.

The speed networking event helped her to get to know what each organization in the area offers.

She was excited because now she can go back to people in Clairton with new resources to help them with their daily lives.

Garland said being in the room helped him feel energized.

“The excitement is contagious,” he said.